Do you want Sam Elliott to voice your radio commercial, without paying the price to have the real Sam? Have a listen to our Sam Elliott voice impersonator. Enough said. If you’d like a quote, please state the length of the script and what it will be used for (i.e. radio, television, web video. Also provide the market it will be broadcast in and the length of the campaign). Email for details.

We can also write your radio script in a style that suits the voice of Sam. Looking for video narration? Check out this sample of our Sam Elliott Video Narration.

This is a picture of the ‘real’ Sam Elliott. While our voice talent does not look like him, his voice impression of Sam is remarkably close to the real thing. 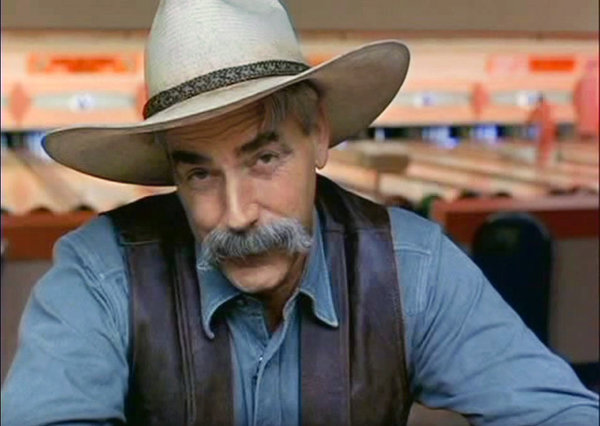 The REAL Sam Elliott was born in Sacramento, California. In college he performed on stage in a theater production of Guys and Dolls. Soon afterward he was off to Hollywood to make his mark in show business. His appearance and voice became a good fit for western movies, where he gained many roles as a character actor.

As Sam honed his acting chops, it was not long before he landed a variety of roles in major motion pictures and television movies. With 99 acting roles to date (and counting we hope), some of Sam Elliott’s top movies include Tombstone, Road House, We Are Soldiers, Conagher, Ghost Rider, The Quick and the Dead, The Big Lebowski and more.

Sam Elliot has also worked as a producer and writer. His voice in radio and television commercials has become synonymous with gritty authority and unwavering trustworthiness, whether he’s selling trucks, beef or beer. Advertisers like his recognizable sound. Some of the clients who have enlisted the voice over services of our Sam Elliott impersonator for their radio commercials include real estate properties, political ads, county fairs, car dealers and even voice mail messages.

Contact Us for a quote on your Sam Elliott project. From dry voice to full production with music and sounds effects, we provide quick turnaround within two or three days.